This young cow who was spared from an auction is now living with 12 dogs and believes she is one of them.

The small cow known as Moola has lived with a rescue organization. Moola is a rather unusual cow since the 12 dogs on the farm are her best friends. Moola was acquired at an animal auction and brought to the farm. 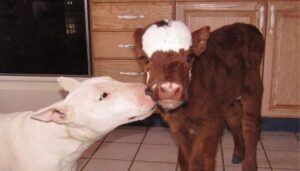 She was especially little compared to other calves. These kinds of cows are also unusual to find at auctions. The buddy bought the mini-cow and took it to the sanctuary. 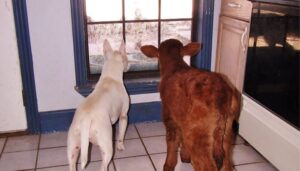 Because Moola is still so young and reliant on milk, she is kept inside the house rather than outside with other cows. Inside the house, Moola first came upon the dogs, who had also been saved in a separate circumstance and transported to this farm. 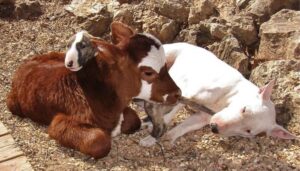 Surprisingly, Spackle, a white bull terrier, received the most attention from the cow. She likes hanging out with youngsters and is immediately friendly with Moola. Moola possibly began to think that she was one of the dogs after spending six weeks in a home with canines. 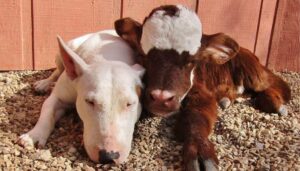 On bright days, she has been temporarily taken outside and has recently been exposed to another rescued calf. Wolf thinks that Moola will now understand that she is still a cow.

The dog was overjoyed to have been rescued, and she wagged her tail as a symbol of adoption!